Wednesday, 18th of July 2018 the opening of the dance section of the Sovicille summer program 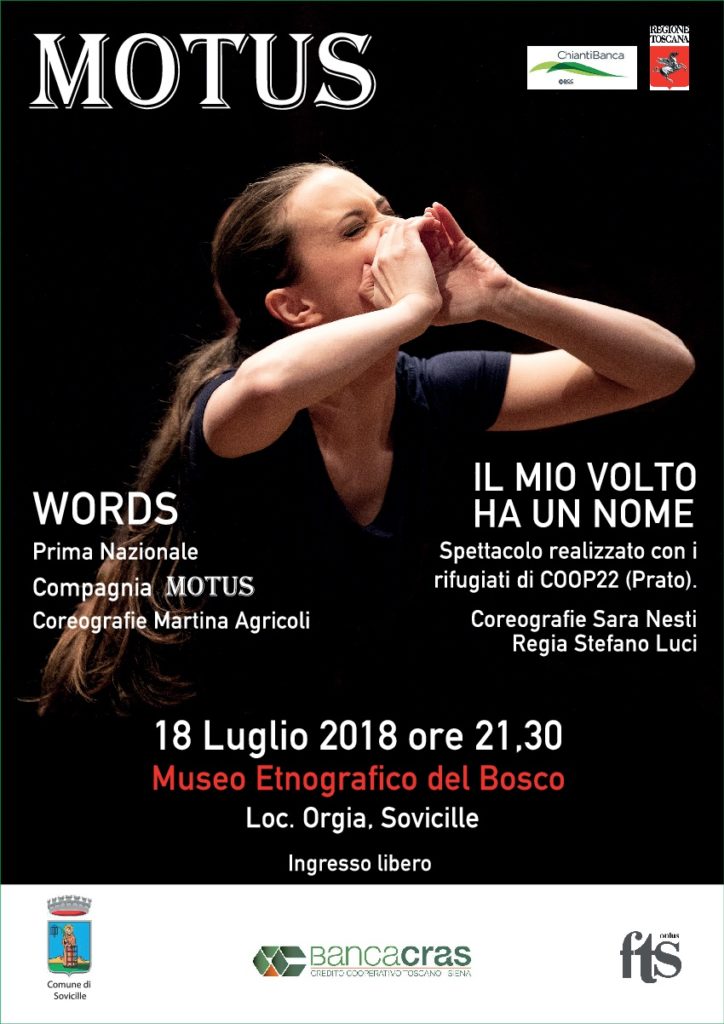 Wednesday, July 18 at 9.30 pm the Museo Etnografico del Bosco (Orgia, Siena, Italy) will host the national premiere of the MOTUS Company’s show “Words”, choreographed by Martina Agricoli and produced with the support of Regione Toscana and Chiantibanca.

The work that MOTUS brings on the stage is in line with the main theme of the 2018 edition of the festival “Sovicille d’Estate”, which is Africa. “Words” is a provocation to those who in our country support the isolation, ignoring that the African continent pays a high price, due to the exploitation by the most industrialized nations, and that the escape from poverty and wars depends on responsibilities which have historical roots in our countries. Performed by Martina Agricoli, Andrè Alma, Carolina Fineo, Ilaria Fratantuono and Roberta Morello, the show is part of “Muta-menti”, the new three-year production project 2018-2020 of the MOTUS Company.

The African continent will play the main role also in the second part of the evening with “IL MIO VOLTO HA UN NOME”, a show choreographed by Sara Nesti, directed by Stefano Luci and presented by the refugees from COOP22 of Prato. The work was born from a dance workshop, aimed at the building of a relationship of empathy, support and sharing among the participants that allowed the young refugees to express, through gestures, the memories, the present life, the beauty and the culture from where they come from. During the show, performed by Marvis Ogbewi, Bakary Sidibe, Stephane Allui Koffi, Duah Muhammad Junayd, Toure Moussa, Kaba I. Kalil, Diomande Lacine, music from the original countries of the participants, songs from the ancient western tradition and contemporary music will be used. Music, and the way in which the dancing body represent it, will become in this way a bridge between cultures.

The show opens the dance section of the summer program of the Municipality of Sovicille, realized with Fondazione Toscana Spettacolo onlus and supported by Banca CRAS.

The evening is free entry.