“SEGNALI” BY MOTUS WITH THE LIVE MUSIC OF FRANCESCO PETRENI

“SEGNALI” BY MOTUS WITH THE LIVE MUSIC OF 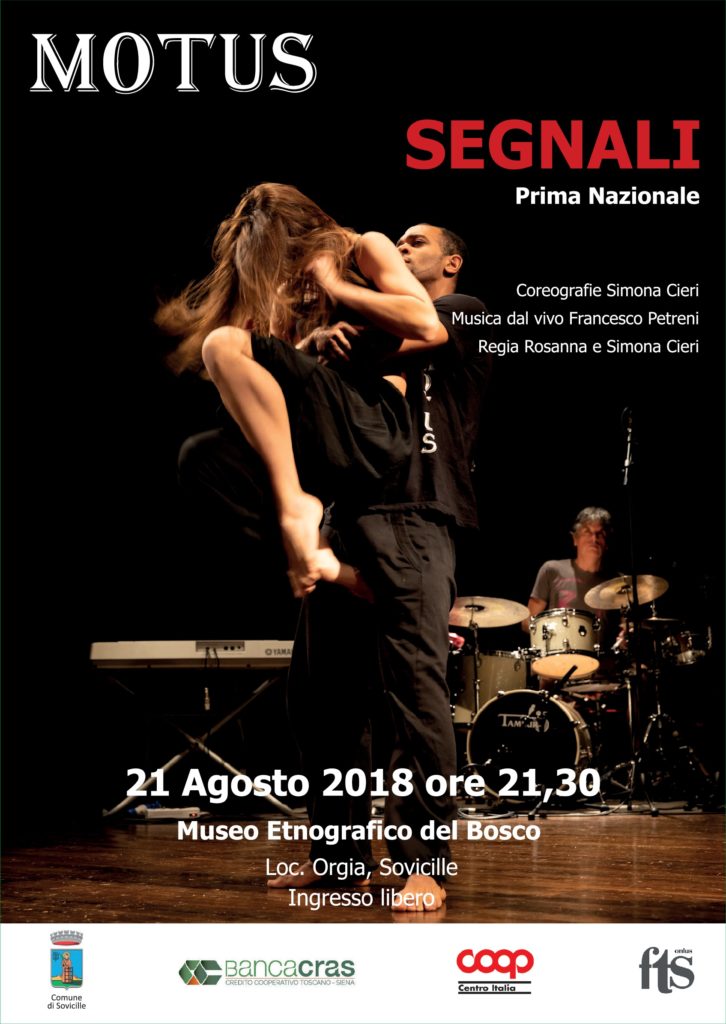 Tuesday, August 21 at 9.30 p.m. the Museo Etnografico del Bosco (Orgia, Siena) hosts the dance concert “SEGANLI” produced by the MOTUS Company in collaboration with the musician and composer Francesco Petreni, with the support of the Tuscany Region in the frame of the artistic residence project of the Company at the Municipality of Sovicille.

With “SEGNALI” MOTUS proposes a comparison between the music-dance interaction and the social world. In fact, hundreds of millions of musical messages are transmitted every day in the musical communication, but only a few of them are completely received and only a few of their meaning, aesthetic and cultural function of the sound are understood.

In the same way, sometimes, the direction of history is affected by the ability to perceive signals of social and economic change. In essence, as the interaction between music and dance can be a chance to listen in a new way to the score and the composition,  the ability to read the signs of change offers the opportunity for the creation of a new social and political environment.

Francesco Petreni, drummer, multi-instrumentalist and composer, will perform live the original music composed for the show.

Francesco Petreni has played with the best jazz musicians, participating in international festivals and shows. He has collaborated on several occasions with the MOTUS Company. He has recorded over seventy CDs and is part of many musical projects. He plays in a trio with Stefano De Bonis and Paolino Dalla Porta and is part of the Italo-Brazilian group InventaRio, with whom in 2014 he was nominated for the Latin Grammy Awards. Since 1995 he has been the leader of the “Bandao” Percussion Orchestra with which he has participated in over 500 shows and carnivals. He teaches at the Siena Jazz University and at the Mascagni Conservatory of Livorno and is a permanent member of the international pool of professors and concert performers of the Global Music Foundation.

The show is part of the summer program of the Municipality of Sovicille, realized in collaboration with Fondazione Toscana Spettacolo onlus and supported by Banca CRAS and Coop Centro Italia.