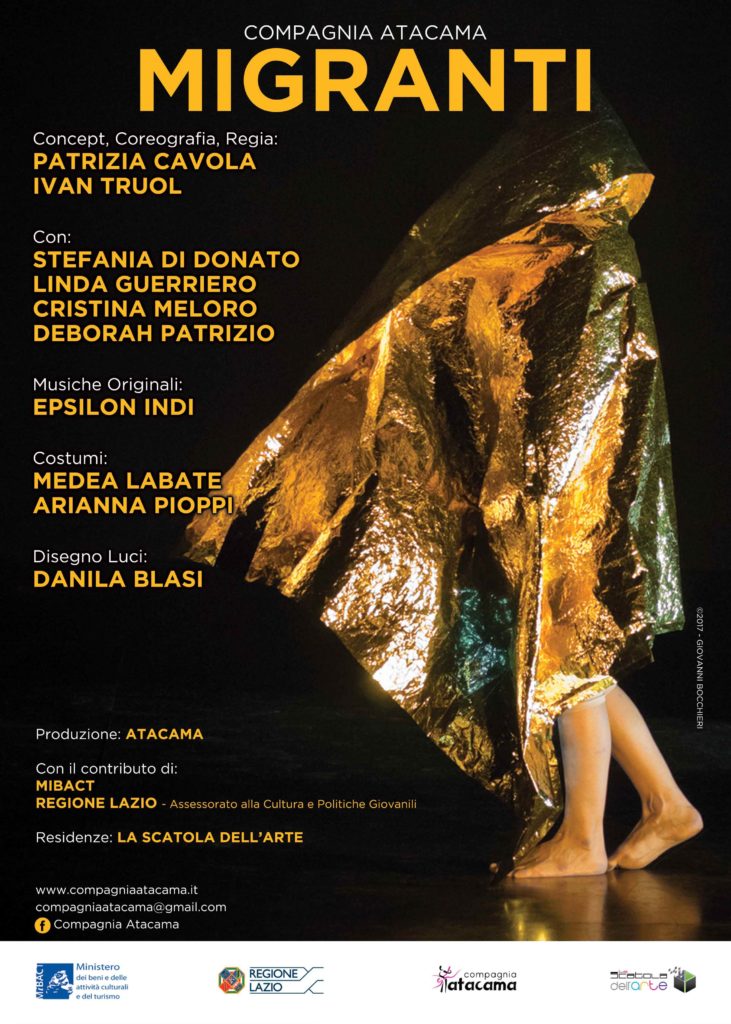 The tenth edition of “Move Off” Festival, organized by the MOTUS Company in collaboration with the Municipality of Castelnuovo Berardenga, comes to its conclusion with “Migranti”, a show produced by Atacama Company with the support of MIBACT Ministero dei Beni e delle Attività Culturali e del Turismo -Dipartimento dello Spettacolo and of REGIONE LAZIO – Assessorato alla Cultura e Politiche Giovanili. The show will be presented as regional premiere on May 12 at 9:30 p.m. and replied on May 13 at 6:00 p.m. at Alfieri Theatre in Castelnuovo.

The subject of this “Move Off” Spring edition has been “the acceptance”, with clear reference to the displacement of peoples trying to escape from painful situations, such as wars or extreme poverty, looking for a place to survive in Europe. Such subject has been present in all shows presented at this year Festival, from “Changes” and “Ages” the two shows produced by the MOTUS Company with the support of Regione Toscana, to “Il mio volto ha un nome” (translation: My face has a name) the show played by the group of asylum seekers from COOP 22 in Prato, where they tell in an engaging way their different but similar stories of refugees.

“Migranti”, the show proposed by the Atacama Company, takes up such a complex theme in a poetic and visionary way, through dance (interpreted by the dancers Stefania Di Donato, Linda Guerriero, Cristina Meloro and Deborah Patrizio) words and sounds played on the original music by Sergio De Vito – Epsilon Indi.  In line with the particular research of the Atacama Company, this show is built on physical theatre, and can be located in a multidisciplinary borderline area, where movement and dance, vocal expression, text, music and any other artistic forms interact and integrate with each other.

“The show tries to analyze the theme of migration in an innovative way- the two choreographers and founders of the Company, Patrizia Cavola and Ivàn Truol explain- using the body as a mean of communication. Dancers are daily obliged to compare themselves with the concept of movement and mobility. Getting into this kind of research exploring the movements of individuals and groups, as well as those of the animals, flocks or herds, analyzing their directions and paths, means to start a journey and reach a foreign place. Arrivals and landings imply to meet other and diverse people. This can be seen as a danger, but also as an opportunity. It can be a simple encounter or facing, but also a conflict”.

The cost of the ticket for the evening show and the afternoon one is € 10.00. For information and reservations send an e-mail to info@motusdanza.it or call 0577 286980.