“GULASH CONCERTO” AT THE INTERNATIONAL CENTRE OF ART

“GULASH CONCERTO”
AT THE INTERNATIONAL CENTRE OF ART 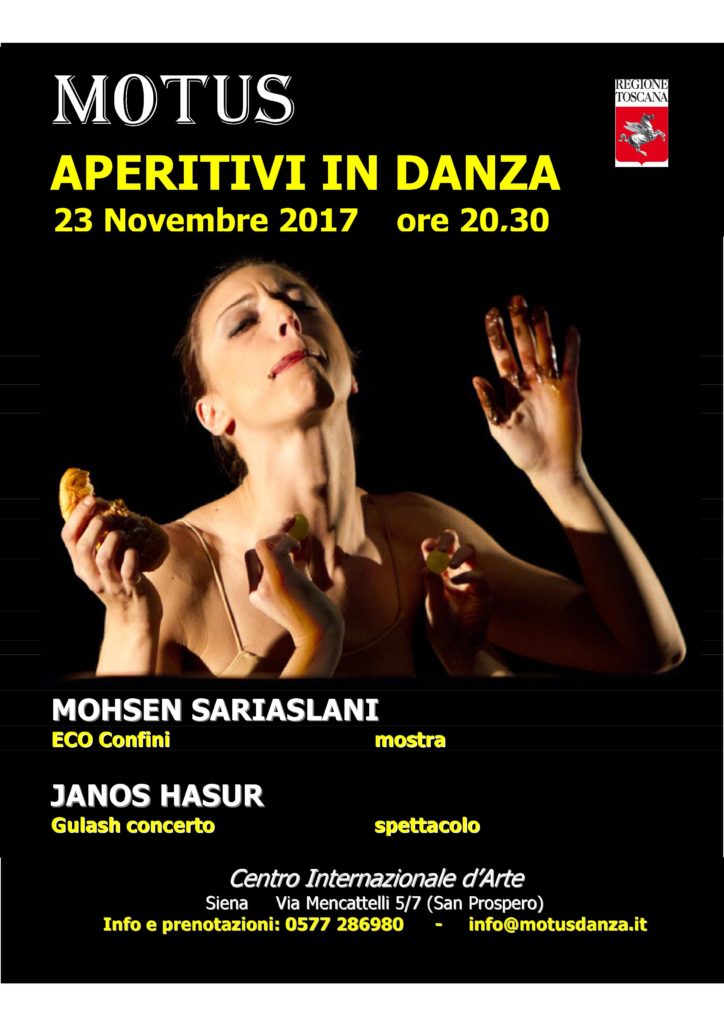 The new appointment of APERITIVI IN DANZA proposes a gastro-musical evening, preceded by the inauguration of the photographic exhibition “ECO Confini ” by Mohsen Sariaslani.
Mohsen Sariaslani is a photographer and a very active exhibition organizer: he will presents at the International Centre of Art (Via Mencattelli 5/7, Siena) a series of photos taken during the performance “E’ così”, created by the Russian choreographer Tanya Khabarova. In July 2016  the Municipality of Sovicille in collaboration with MOTUS  presented the show also at the Montarrenti Castle . Mohsen, inspired by the dancer’s movements and by the legend of Eco and Narciso, develops the artistic project “ECO Confini”. Following the ancient mythology, Eco was a  nymph in love with the beautiful Narcissus; after being refused, she found shelter in the woods, where, because of her pain, she disappeared and only her voice survived. Narcissus instead turned into a yellow flower surrounded by white petals. Overcoming our limits and changing ourselves is a necessary process in nature and in human nature. ECO (oikos in Greek) indicates the ecosostenibility of existence as a life’s path of changes and metamorphosis. After all,  boundaries are bridges: everyone is free to choose the bridges and the metamorphosis to go trough.
After the opening of the exhibition, Janos Hasur will present “Gulash Concerto”. Janos Hasur, Hungarian violinist known in Italy for having accompanied with his music the performances of Moni Ovadia for over 12 years, played with legendary groups such as Vizöntö and Kolinda and created also solo shows, such as “Violino e racconti”.
“Gulash Concerto” is a gastro-musical evening: a real one-man show in which Janos tests himself in cooking, music and acting. After the tasting of the famous Hungarian dish, accompanied by the traditional “nokedli”, the concert will begin. During the performance, musics of Eastern Europe (Hungarian, Transylvanian, Romanian, Bulgarian and Klezmer) will alternate with  anecdotes, stories and jokes,. As the artist says: “It is obvious that the show would work also without gulash, but it would be a pity to lose this opportunity: to taste the traditional Hungarian dish prepared by a real Magyar violinist”.

The cost of the ticket is 10 euros. Booking is recommended. For more information and reservations: info@motusdanza.it or 0577-286980.