APERITIVI IN DANZA on 18 May

“APERITIVI IN DANZA” WITH  “UNINTENTIONAL PORTRAITS”

AND THE MOTUS COMPANY DANCE 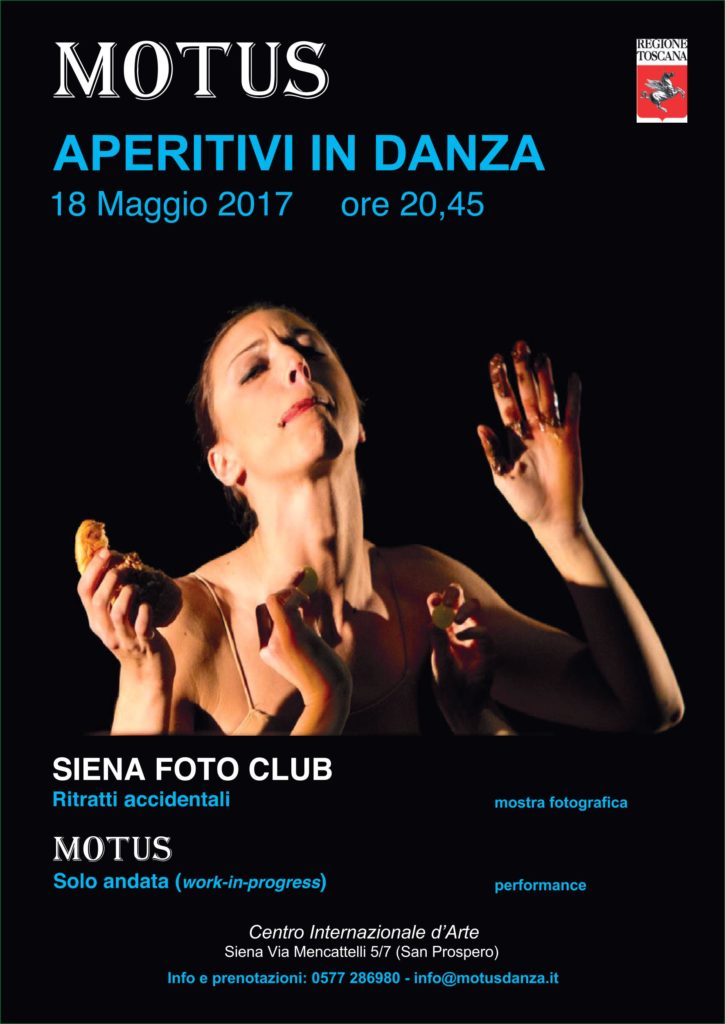 The new appointment of APERITIVI IN DANZA, cycle of informal meetings organized at the International Center of Art in Siena (Via Mencattelli 5/7, San Prospero) in order to share the pleasure to feed body and mind, proposes  a photo exhibition and a dance performance.

The event starts at 20.45 with the opening of the  photo exhibition “Unintentional Portraits”, a collection of unexpected  meeting with people captured in portraits by the members of the Siena Photo Club. The exhibition includes photos by Mauro Agnesoni, Simona Capannoli, Barbara Geratz, Carmela Gioia, Mauro Guerrini , Gianni Lombardini, Francesco Paris, Carlo Pennatini, Luciana Petti, Patrizia Piattelli, Claudio Sciarra.
The Siena Photo Club is aimed to develop photography, involving people who share the same passion and  trying to build synergies with Siena cultural institutions and places of culture. The event in collaboration with MOTUS formalizes a longstanding relationship between the dance Company and some of the members of the Club, primarily Carlo Pennatini, who always followed the Company performances, but also Mauro Agnesoni, Carmela Gioia, Luciana Petti and others who, from time to time, have experienced the difficult art of portraying the dance of the MOTUS Company.
After the opening of the exhibition, the MOTUS Company will present another work-in-progress of the new production “Solo Andata” (choreography by Simona Cieri and direction by Rosanna and Simona Cieri), with Veronica Abate, Martina Agricoli, Andrè Alma, Ilaria Fratantuono, Simona Gori and Mattia Solano. A work-in-progress built step by step by the Company on the theme of discrimination, which is the last act of the three-year project on “Prejudice”, supported by the Tuscany Region.
At the end of the evening, a buffet will be offered, during which the audience can meet the artists, chat, tasting and enjoying the exhibition.
For information and reservations: info@motusdanza.it or 0577 286980.