On Thursday, October, 24, at 8.30 pm a new event  of the season of “Aperitivi in danza” by the MOTUS Company

THE PERFORMANCE “IO, LEI, ME” BY THE ATACAMA COMPANY FROM ROME 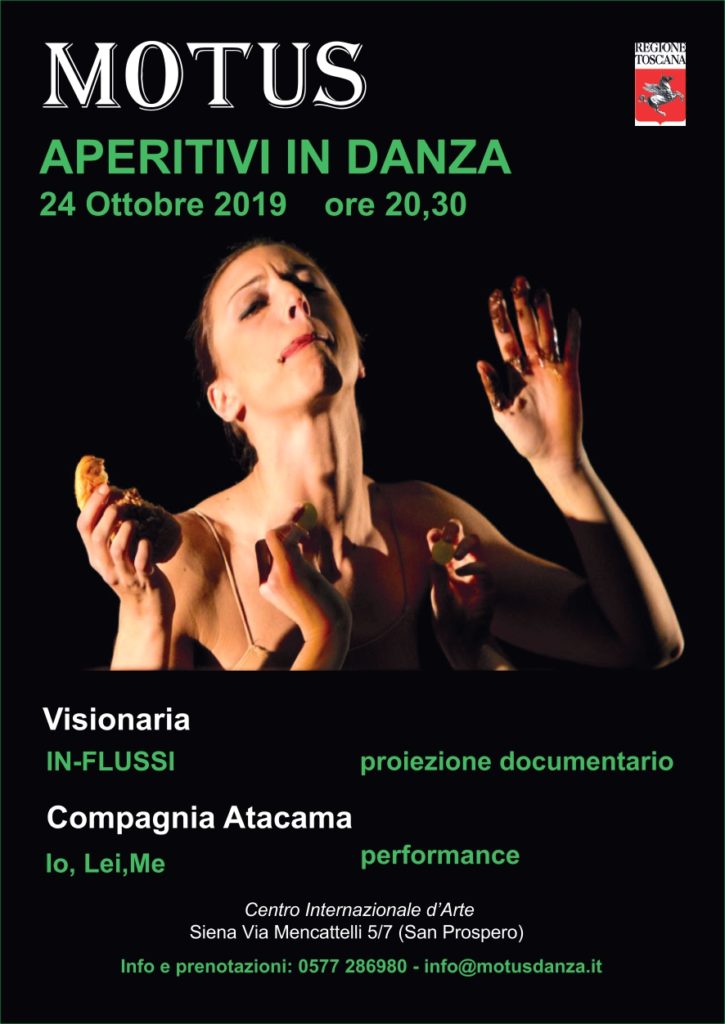 After the success of the first event of the new season, the “Aperitivi in danza” Festival organized by the MOTUS Company continues.  On Thursday, September, 24, at the Centro Internazionale d’Arte (Via Mencattelli 5/7, Siena, Italy), the second event of the season foresees a rich program, between dance, cinema and taste.

The event will start with the preview of the documentary film “IN-FLUSSI”, realized by the Associazione culturale Visionaria to descrive the creative process of the IN-FLUSSI project, created by MOTUS in collaboration with Comune di Castelnuovo Berardenga and funded by Regione Toscana and Ministero del Lavoro e delle Politiche Sociali. The project involves a network of associations and cooperatives, such as Arcisolidarietà Siena, Oxfam Italia Intercultura, Visionaria, and institutions as the University for Foreigners of Siena.

The IN-FLUSSI project involved a group of young people from 14 different countries. Those young people had no experience in dance or theatre, but they attended a cycle of workshop led by Simona Cieri, Choreographer of the MOTUS Company. All participants worked exchanging experiences and stories through movements, creating the dramaturgical structure of the show, premiered and represented several times successfully during 2019.

The Associazione Culturale Visionaria, partner of the project, documented the whole process. The emotional video shots, made by Renzo Barbetti, Roberto Dini and Andrea Searle, tell the journey of this collective, starting from the first meeting, to the public presentation of the final show, emphasizing how, in the great sea of cultures, there are no unidirectional flows.

Following, the Atacama Company (Rome) will present the performance “Io, Lei, Me”. The work, performed by Valeria Loprieno on choreography by Patrizia Cavola and Ivan Truol, brings on the stage the endless facets of the human soul, which can pass from joy to pain, from fear to amazement, from pleasure to shame in a moment of second. A performative research on the female heroic body, naked in its exposure, without skin or defenses, which reveals the contradictions of the human soul, impulses and falls, sudden changes.

At the end of the evening, the audience will have the opportunity to meet the artists during the buffet.