“A City For Women”: MOTUS’ project for “Siena Città Aperta” 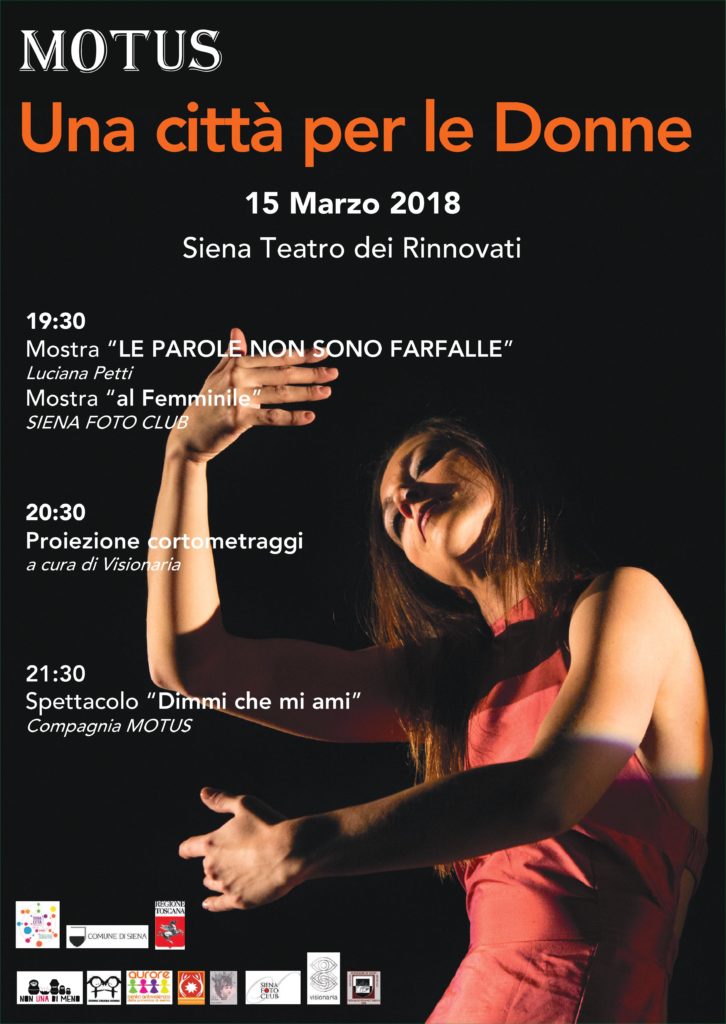 “A City For Women” is a MOTUS’ project, realized with the support of Siena’s Municipally, in the frame of “Siena Città Aperta”, with the aim of raising awareness about women’s right, through a outreach event that involves the whole city.
The Project  is organized in collaboration with associations involved every day in the battle for women’s right (Centro Culturale Mara Meoni, Associazione Aletier Vantaggio Donna, Nonunadimeno Siena), anti-violence center (Donna Chiama Donna and Associazione Aurore), artistic and cultural associations and institutions as “Rinaldo Franci” Conservatory, Siena Foto Club and Visionaria Film Festival.
On 15 March, starting at 7:30pm, Rinnovati Theater will host the final event open to the whole city and free entry, to confirm that Siena wants to be a space free from violence. At 7:30pm two exhibitions will be inaugurated in the Foyer of the Theatre. The first exhibition is a photo-installation by Luciana Petti, “Le parole Non Sono Farfalle” , focuses on concept of “prejudice” and on the preconceptions that lead to genders’s discrimination. The second exhibition is a photo-exhibit entitled “al Femminile” , realized by “Siena Foto Club”. ”Watching Siena’s women is observing Siena – says Carlo Pennatini, Siena Foto Club’s president – and our aim was to photograph female beauty, highlighting  commitment, tenderness, altruism, determination, success and even normal daily life”.

Then, at 8:30pm, always at Rinnovati’s Theater,  the best short-films on the theme of female, selected by Associazione Visionaria among the editions 2015,2016 and 2017 of “Visionaria Film festival”, will be screened.

At 9:00pm the evening will end with the show of the MOTUS Company , “Dimmi Che Mi Ami (Tell me that you love me)”, produced with the support of Tuscany Region and Siena’s Municipally. The show deal with the themes of precariousness’ of emotional relationship, violence and feminicide. The show, created in  collaboration with Daniele Sepe, musician and composer, author of the original soundtrack, will be staged by the dancers Martina Agricoli, Andrè Alma, Carolina Fineo, Ilaria Fratantuono, Simona Gori, Roberta Morello and Mattia Solano, directed by the choreographer Simona Cieri.

The project “A City For Women” has provided moments of reflection in the city and in the schools, like Womens’ Day and, on 12th March, a workshop of the MOTUS Company at the Conservatory  “Rinaldo Franci”.“This project – says Simona Cieri, choreographer of the MOTUS Company  – is born from the conviction that through the arts is possible to convey important messages and create awareness on social topics, like the violence. This is also the purpose of “Siena Città Aperta”. And maybe this small contribution will prevent  new generations to assume asymmetric and sexist models of behavior and relationship.”