WHY DON’T WE INVITE PAOLO CONTE?

The show deal with the subject, already debated, of the artistic creation and the relationships with the market, but it has the fresh tone of something truly experienced.

The starting point is the presentation of the last work of Motus at the choreographer’s home, with the famous singer Paolo Conte, as special guest and as godfather of the event.
Action takes place on two different planes separate also physically between them: the stalls, furnished like an apartment,  it is the real world, while the stage is the place of the artist’s reflections.
On the stalls the figure of the protagonist is moving. She is a maidservant, and, not by chance, her name is Marisa. She is a simple woman and a little bit muddler, Tuscan and loquacious, endowed with a whole her own wisdom, really direct and without mincing her words. In counterpoint, on the stage,  the dancer Simona, is deeply fond of her mental lucubration, her reflections about art, her poetry.
In addition to dancers, that represent the artistic thoughts dancing on the music of Paolo Conte, a third character wanders around the theatre: Leonardo da Vinci. The surreal appearances of Leonardo have a symbolic value. Leonardo is the art, that one a little bit artisan of the XIV century, that one true and curious, that one that puts aside the current fashion and the tendencies, that one which looks forward and, with the power of creation, imagines the future.
Another protagonist is the audience which, in the stage pretence, represents the group of guests, come numerous just because the announced presence of the artist Paolo Conte.
The story has not an happy ending; it evolves in a series of little disasters, rendered comical by the maidservant Marisa, and in the cancellation of the show.
Paolo Conte, as fame, does not arrive and the artist remains with his art. 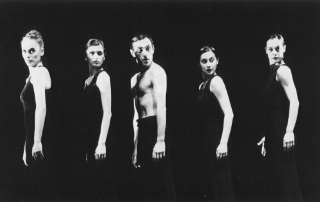 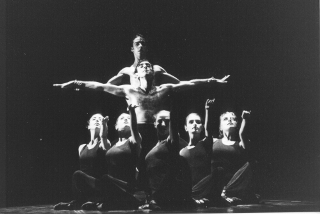 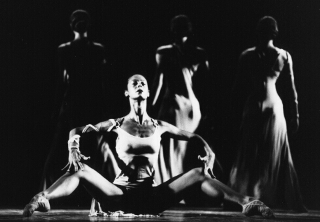